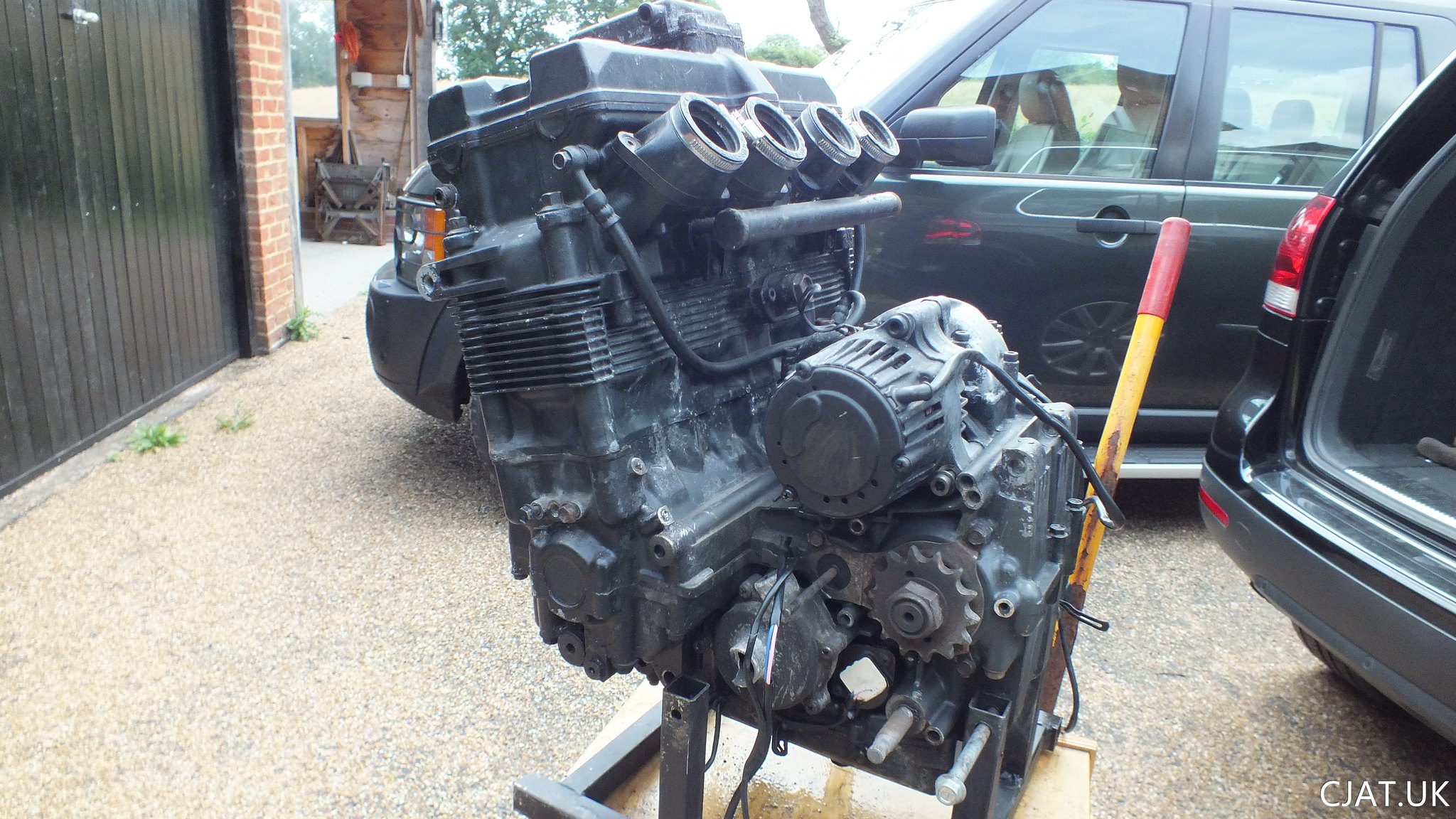 OK so I’ll admit it, it’s been a while since I’ve updated my RF900 streetfighter blog… a very very long while but there’s a good reason for that… I hadn’t done much with it…. So apologies for the long wait but I have finally done a couple of things and can update you on how the RF900 streetfighter is coming along.

Getting rid of some the dust covers that was put on over a year ago (this was summer of 2015).

So did some tiding up of the electrics as the new R6 subframe has a lot less room that the fat arse of the RF900.

Also fitted the Akrapovic Headers which needed a little bit of fiddling to get fitting correctly but look very nice. As it’s a streetfighter now and there are no fairings to hide the headers, I am so glad I went with the Stainless steel exhaust system and the fact it’s an Akrapovic one is just the icing on the RF 😉

The carbs have now sat for the best part of 3/4 years and need some TLC but I thought I may try and start the RF900 up and see if the bike was still working after its hibernation before sending the carbs off to rebuilt.

However, I can never make life easy for myself and being the idiot that I can, I attempted to start the RF using just the trickle charger, which I later learnt did not produce enough power to turn the engine over. Being the ignorant of that fact, I convinced myself that the starter motor had broken during its long rest, and I bought a second hand one from eBay and proceed to try and fit it. This resulted in me shearing both of the bolts attaching the starter motor and me swearing a lot.

To top this off, I then took the engine out of the frame to make some room to get a drill in and remove the bolts, only to drop the engine and break the waterpump hose connector....

I then decided that with the engine out I should at least attempt something productive and remove the bolts, only to brake my brand new diamond drill bit off inside one of the bolts… honestly I was so angry at myself I didn’t touch the bike again for 3/4 months and decided to get on with other things before I broke something else.

Skip forward to the beginning of this year (2016) and enough time has past for me to calm down and with a bit more time and money in hand, felt it was time to try and get the RF900 back on the right track to being a streetfighter and not just an ornament that my friends ask me when I’m going to finish.

After searching eBay and rfownersclub it seemed that a “new” engine would be cheaper than the cost of removing the sheared bolts and buying a new water pump (the water pump alone was £150!!!).

After nearly 6 months of looking for an engine and nothing appearing, it seemed that progress on the RF streetfighter was once again stalled. But my patience paid off and a “like new” water pump appeared on eBay for £40!!! and I decided the “new” engine wasn’t worth wait for and fixing my mistakes was the way forward.

NEW PLAYER HAS ENTER THE GAME … well not quite but I felt that I needed help, both to get the bolts removed from the engine and to fit the new waterpump  Also if the engine was going to get some work done, it would be best to get it checked over to make sure nothing else was broken. Also, after 17 years the engines’ paint was looking a mess and it could do with a cleanup and a new lick of paint. I had previous found a company in Southampton called Hampshire Motorcycles when I was looking for upgraded front brake calipers to match the Brembo rear calipers I bought, which they do a conversion kits (will touch on this point in a later post).

After a great conversation with their mechanic Rob, who is a top bloke, really knowledgeable and understanding about what I was trying to do (recommended for anyone who needs work done in the area), I came up with a job list for them to complete and at the end of July I took the engine and Carbs down to Southampton for work to begin. Rob Explained that if they couldn’t get the sheared bolts out then a new engine would be needed.

All that was left to do now was wait and hope that the damage I had caused was repairable.