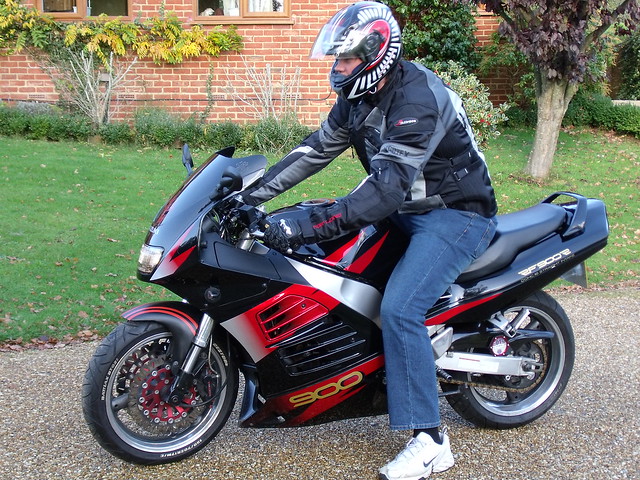 Greetings ladies and gentlemen, and welcome to my Suzuki RF900 StreetFighter transformation blog!

What to expect: A picture-heavy guide to my StreetFighter journey, and my best attempt to explain my work as best I can.

If you have any questions, or want me to clarify anything - give me a shout - I'm more than happy to add more information or respond to any queries.

Why a StreetFighter?
(And a bit of background on my Suzuki RF900)

My Suzuki RF900 was bought in Sept 2009, after spotting it first on eBay and then finding the seller, suzukib, on the RF Owners Club. I was looking for my first bike after doing an intense course with a great company up in Borden - M&C Motorcycle Training  - and was running into problems searching for my first motorcycle:

1. Money: Mid-degree and any money I had was being spent fairly quickly on nights out and academic books.

2. Insurance: I had been to several dealers who had shown me trail and enduro bikes but I really wanted something a bit sportier (actually I wanted a older GSXR or a Fireblade). 19-year old guys are uninsurable apparently. Instead of motorcycle insurance quotes (even on 400-600cc cruisers), the figures made it look like I was asking for a quote on a Ferrari!?

3. Size: I'm a big guy (6'5" and heavy - let's just say that me and that BMI weight index thing aren't on talking terms), so trying to find a bike that fit me comfortably, and without looking like a clown tricycle with me perched on top, was proving slightly difficult.

When in doubt, eBay.
Searching for cheap motorcycles on eBay brought me to suzukib's Suzuki RF900. On to insurance, and I was pleasantly surprised to find that it was only around £300 TFT. Even more surprising was that the price for the Suzuki RF900 was the same as the Suzuki RF600!

So I immediately called and arranged a viewing. Within 3 days it was on my drive way.

The ink was only just dry on my motorcycle driving license, so a test ride was out of the question as I was still restricted to 33bhp. Pretty daring but I made the call and put my trust in suzukib, who assured me everything was running perfectly. After a full service and fitting of the restriction kit, I had my first ride. My confidence in suzukib paid off.

"RESTRICTION? SACRILEGE! This kid's a fool!"
Is what you were thinking right? Putting a 120bhp motor down to 33bhp...

Well, for the 2 years of my restriction I got to ride my Suzuki RF 900 and I adored it. And after the 125cc of my training, it seemed like a bloody rocket. I had only ridden 125cc during my training it seemed like a bloody rocket. Sure, after a little while it was noticeable that it had no real power over 8k revs but seeing that I used it mainly to commute to uni and short rides around Hampshire this didn't bother me too much. As soon as I hit the 2 year limit however, I immediately unleashed the beast. To be honest, after picking her up from the garage for my first unrestricted ride, I opened her up on the slip road onto the A3 and almost shot off the back!

For many years I had been watching other builders like martinrf900r's build, uglyamerican's and a number of custom streetfighter on customfighters.com and decided that, now I had a part-time job and some money, it was either time to sell my bike and get something newer or make it my own and rebuild it. After much thought (actually really not that much) I decided that there was no way I could give up my Suzuki RF900 - despite the fact that it was getting tired, paint was worn, the decals were scratched and a previous attempted at painting the wheels and swing arm with spray cans was starting to chip away. I was also having electrical problems with the starter solenoid and clutch fuse wiring which needed to be replaced.